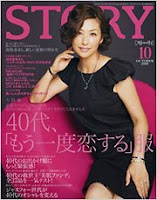 When I lived in Japan for about a year in the 1980s I was struck by the various “rules” I perceived for women in regards to clothing and age. During one’s teens and early twenties, youthful fashion seemed acceptable, like what might be found in the Harajuku or Shibuya shopping districts. But once a woman hit her mid-twenties and, especially if she was married, she seemed to turn into some kind of unfashionable Stepford Wife, becoming a drudge in nondescript skirts, sometimes accompanied by thick nylons and overly sensible shoes. These women still looked young (and I often marveled at how, overall, Japanese women seemed to defy their real age much more so than a lot of American women), but it seemed as though they made an all-out effort now to look older. And once they became mothers, it got even worse, even though they still managed to keep their pert figures. And for those who were hitting thirty and still unmarried, it was more than time to give into the “obasan” (auntie) look since, after all, they were washed up now, doomed to be old maids.

According to recent reports, this is changing. You have to take these trend articles with somewhat of a grain of salt, but things look promising among the atmosphere of the newly liberated single woman over thirty who finds little in the way of marriageable men and has decided to live without such conventions. These new trends have names like otona gyaru (the Japanese word for “adult” and the Japanized English of “girl’) and arasa, which is a characteristic abbreviation of the shortening of the Japanized English term, araundo sa-tei (around thirty) and coyly depicts anyone in the thirtysomething age range. The picture on this blog of a cover of Story magazine even has a headline that says in rough translation: “Your 40s: Have One More Go at Love.”

It seems many of these women are no longer paying attention to the age police and celebrating their youth at any age. It reminds me a bit of the fashion scene in the United States where things have also loosened up for those who want to take advantage of it. Stores like Anthropologie seem to be vague on age, although they say their customers are in the 30 to 50 range, yet the clothes are fashionable and seemingly “ageless.” And a store like H&M, while seeming to cater to teens and young professionals, professes that it does not target its customers by chronological age or dress size as much as mental age and the desire to dress fashionably.

It can be a mistake to attach too much significance to this possible change in Japanese women, especially when a recent poll states that nearly all Asian countries have around 80 to 90 percent of businesses boasting women in senior positions, except for Japan, which has a rate of only 25 percent. It is still obvious that Japan has a way to go in its cultural perception of management roles for women, and things change very slowly there in general, but I think it can be a good first step when women feel freer to express themselves and by doing so get rid of some of society’s restrictions.
Posted by Wendy Tokunaga at 8:58 PM