EVERYONE SHE LOVED - by Sheila Curran 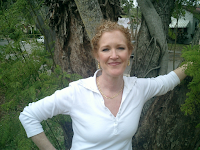 My guest today on the Girlfriends’ Cyber Circuit Lit Blog Tour is Sheila Curran, author of the wonderful new novel, EVERYONE SHE LOVED. Joshilyn Jackson, author of Gods in Alabama and The Girl Who Stopped Swimming, has said:

“EVERYONE SHE LOVED is peopled with women of strong appetites---for love, for sex, for food---and Sheila Curran has amazing insight into the love-hate relationship that women have with each other and their own bodies. Curran is a beautiful writer, both witty and evocative, and she knows how to keep a reader riveted. I was up way past my bedtime, unable to stop turning pages. I had to know what happened to this family and their tight-bound troupe of friends as they meddled and muddled toward hope and new beginnings in the wake devastating loss. I fell in love with them all, from artistic, earthy Lucy, to broken little Tessa, to the oh-so-tightly-wound and mercurial Clover. Read this book, then pass it on to your dearest friend. She’ll thank you.”

Sheila stopped by to answer a few questions.

What was the inspiration behind the writing of EVERYONE SHE LOVED?

I wrote an article for McCall’s magazine about two little girls whose parents died unexpectedly within months of each other. These children were lucky, because their mother had asked her best friends to agree to be their guardians if anything should happen. However, in many states, unless you specify in writing who will take your children, they will be sent to foster care. I was talking to a dear friend about the difficulty of trying to decide which couple I knew could take over for my husband and I. Suddenly, it occurred to me that something EVEN worse could happen. If my husband were to survive me and marry on the rebound, he might not be able to discern who would be kind to my kids and who wouldn’t. Into my head popped an idea: if I really wanted to feel good about his choice, all I had to do was ask that if he were to remarry, he’d have to introduce the woman to my sisters and best friends. I knew without a doubt that I could trust their collective opinion.

So that’s the premise to this novel: a woman like me, a little imaginative, a little neurotic, a lot anxious, talks her husband and friends into setting up a vetting system by which her husband’s choice will be approved or vetoed. Everyone laughs, but the sign the agreement anyhow, wanting to put her mind at ease. Two years later, she’s gone, and they have to carry on without her. Neither child is thriving: her fourteen year old is very thin, her ten year old a bit overweight. Enter a newcomer to town, a confident, lithe, fitness instructor with a degree in nutrition. This perfect stranger seems to offer all the answers, but she has no sense of humor, she’s very pretty, and she thinks she has the answers to all questions life has ever offered, despite the fact that she is ten years younger than both the vetting committee and the widower.  What is one thing you’ve learned about the publishing industry since getting your first book deal?
That a book has a very short time in which to make it or break it, and that most authors have to do all their own publicity unless they have hundreds of loyal fans willing to spread the word about their book.

How do you approach writing your novel? Do you outline the plot? Start with a character or...?

I start with a character, and a sort of question that the plot will eventually help answer.

Who are the top three writers who have influenced your writing style?

Oh there are too many to name. Plus I’m not certain whether the writers I admire have really influenced me, despite their excellence. I think I write a little bit like Zadie Smith, Diane Johnston and Claire Messud, in that I write fairly intricate domestic novels with lots of personal observations on character and on social norms…But the writers I adore? William Styron, Wallace Stegner, John Le Carre, Mary Doria Russell, Elizabeth George, Virginia Woolf, George Elliot, the Brontes, Jane Austen, Trollope, John Fowles and Kaye Gibbons. And that’s just off the top of my head. Oh, Geraldine Brooks, too. And I won’t even name the writers I’ve been blurbed by because that’d be way TOO obviously sucking up. There are probably billions of writers I’ve forgotten, like Charles Frazier, Anna Akmatove, Dostoyesvski, Tolstoy, Turgeneve, Mario Vargas Llosa, and Gabriel Garcia Marquez.

9-3 with a break for exercising and lunch.  What do you like to do when you’re not writing? I read, walk, and watch movies.

What is your advice for those who looking to get their novel published?

Write every day. Make your goal at least one page a day, no matter how bad, or one hour a day, even if all you do is sit and stare at your screen.

Find out more about Sheila at her Web site. We wish her the best of luck with EVERYONE SHE LOVED.
Posted by Wendy Tokunaga at 10:36 AM