Hand of Fate by April Henry and Lis Wiehl 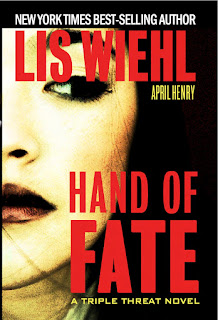 My guest today on the GCC Lit Blog Tour is April Henry, co-author with Lis Wiehl, of Hand of Fate, the latest book in their successful Triple Threat mystery series.

When the host of a popular radio talk show is murdered, the suspects almost outnumber his millions of listeners. Outspoken radio talk show host Jim Fate dies after he opens a package that releases poisonous gas while his polarizing show, "The Hand of Fate," is on air. In the ensuing panic, police evacuate downtown Portland. Soon the Triple Threat of FBI Special Agent Nicole Hedges, crime reporter Cassidy Shaw, and Federal Prosecutor Allison Pierce begin piecing together the madness, motive, and the mystery that lie behind Fate’s murder.

While Lis has worked with Bill O’Reilly for years (often serving as the voice of reason or his liberal foil, depending on your point of view), the character is in NO WAY based on O’Reilly.

This is the second in the Triple Threat mystery series, which has been optioned for television. The first, Face of Betrayal, was on the New York Times bestseller list for four weeks. And in April 2011, readers can look for Heart of Ice, which traces the path of destruction left by a sociopath and based on a real-life case Lis prosecuted.

About the Authors:
Lis Wiehl is a former federal prosecutor who is now a legal analyst for FOX-TV.

April Henry grew up in a little town in Southern Oregon where the main industries were timber and pears. When she was was 12, she sent Roald Dahl a short story she had written about a six-foot-tall frog named Herman who loved peanut butter. He not only wrote her back, but also showed it to the editor of an international children’s magazine, who asked to publish it.

Since then, April has written nearly a dozen mysteries and thrillers for adults and teens, with seven more on the way. Look for her young adult thriller—Girl, Stolen—coming this October.

April was kind enough to answer a few questions...

What was the inspiration behind the writing of Hand of Fate?
Lis and I were sitting with the publisher in Nashville, and he said he would love for us to do a book where we killed off a character like Bill O’Reilly, whom Lis has worked with for years. We actually managed to work in a number of references to other radio talk show hosts—about ten in all.

What is one thing you’ve learned about the publishing industry since getting that book deal?
“Tireless self promoter” sounds ugly to everyone but your publisher. [Love this!]

What do you like to do when you’re not writing?
Run, go to kung fu class (The most fun ever! It's great to hit the bag really, really hard), read, and try out new cookbooks.

Thanks, April, and hope fate is kind to Hand of Fate.
Posted by Wendy Tokunaga at 10:06 AM