The amazingly talented writer and teacher, Linda Watanabe McFerrin, is my guest today. Her latest book, out on September 1, is the novel Dead Love, published by Stone Bridge Press. (You can pre-order it HERE).

Dead Love is a supernatural thriller in the tradition of Mary Shelley, E.A. Poe, Mikhail Bulgakov, and Anne Rice. The novel follows a cast of nefarious characters, both human and otherworldly, as they foil and foul one another’s plans and power plays in a conspiracy of global proportions. It begins when Clément, a lovesick ghoul, falls head over heels for a beautiful young woman. Unfortunately, the girl is marked for death by the Japanese mob (the Yakuza). What’s a ghoul to do? He’s got to create a means to save her. Using secrets learned from a Haitian witchdoctor he finds a way to rescue and possess her, but not in the manner he’s expected. Set in Central America, Europe, Scandinavia, Asia and Southeast Asia, the novel jets readers all over the planet on a diabolical joyride that is destined to end darkly.

Linda not only writes fiction, but is an accomplished non-fiction writer, known especially for her travel writing. She is the editor of the 4th edition of Best Places in Northern California. Her work has appeared in numerous journals, newspapers, magazines, anthologies and online publications including the San Francisco Chronicle Magazine, the Washington Post, the San Francisco Examiner, Salon.com and many more. She also writes poetry and is the author of two poetry collections. Linda is the founder of the Left Coast Writers Literary Salon, which meets on the first Monday of every month at the premier independent bookstore Book Passage in Corte Madera, California. 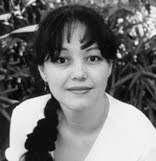 Linda graciously agreed to take the time to answer a few questions...

Can you tell us a little about your background and your connection to Japan and Japanese culture?
I am part Japanese; my mother is Japanese and Welsh. Her father was a British journalist and teacher in Shanghai where he met my grandmother, who was a Japanese actress. My mother was raised there. We have super old family photos of Shanghai in the 30’s. When I was a girl I lived in Japan for several years. My first novel, Namako: Sea Cucumber is roughly based on the time I spent there as an adolescent. I love Japan, but being only part Japanese, I did not fit in at all. That’s where the concept for Namako originated … I felt like a creature in between two worlds and a part of neither. I’ve been back to Japan many times and I keep writing about it. My favorite city is Tokyo. I love the way it rose up from the ashes and became this crazy, new, almost frenetic place. But it also has its peaceful side, and there are still some magical old neighborhoods.

What was the inspiration behind the writing of Dead Love?
First, I should mention that there is a very lovely supernatural thread that runs through Japanese literature and storytelling. I think some of my work is born of that tradition. My grandfather wrote; my mother, a linguist and translator, wrote; and as a child, my world was full of stories. They were pretty dark stories—a kind of kabuki-Brothers Grimm-E.A. Poe mélange. My mother was also quite dramatic. So that influenced my thinking and my fondness for a creepy tale well told. But as far as the actual topic goes, I was going through a rough spell when I read ethno-botanist Wade Davis’s The Serpent and the Rainbow, which was about his pursuit of a “zombie formula” in Haiti. It captivated me and was probably how the zombie seed was sown. I worked on Dead Love for years and years.

What's your advice for writers who are looking to get their novel published?
Well, I think we write for ourselves, we publish for others, so never lose track of your reader. My friend and teacher, the surrealist poet, Nanos Valaoritis, called this person “the fugitive other” and that really resonated with me. So I’d say that it is a chase, a hunt for the fugitive other. You have to find that “other” and get them to listen … whoever they are. Obviously that fugitive other is not going to come knocking on your door, so get out there and find him/her. I had to do that … I hunted long and hard … and now I’ve discovered a huge host of zombie lovers all over the world,—zombie walks, zombie this and that—and I am happy, happy, happy.

Describe your writing process.
I write every day as practice. I think writing is like any other performance work; you can’t just get up and do it in front of people without working out and perfecting your presentation. This is fine with me because I love to write. I write in a variety of genres; I’ve published poetry, long and short fiction, nonfiction. Generally, I think things out, then, I do a quick outline, leads and closes, transitions, scenes. After that I line up my characters, show them the space and see what they do. Well, in fiction, I do that. Non-fiction is far more managed and manageable because you don’t have all those characters insisting on things their way. For example: Clément was a VERY difficult character to manage and at first Erin would just sulk. She’s a lot better now. She blogs every single day. Yeah, it’s that real or virtual or whatever with them.

You founded the wonderful Left Coast Writers Literary Salon that meets on the first Monday of the month at Book Passage in Corte Madera. Can you tell us the story of how it came about and how people can join?
Well, I had a writers group that kamikazeed and I was in mourning. So I went to Elaine Petrocelli at Book Passage and said that I had this idea about a group and a salon and Elaine, who is up for almost anything literary and bookworthy, said, “Why not?” I love that about her. We thought it might be just 10 or so, but people kept calling and calling. Margarita was worried and called to say, “Oh, no, we have over 30 and they keep calling; I don’t know if we have space. Do you want to cut it off?” But Bill Petrocelli said they were adding the Gallery, so no problem, and the writers kept coming. That was years ago and it is SUCH a great group, don’t you think? I guess we all crave the company of other creative minds and an occasional break from the garret. All a writer has to do to sign up is call Book Passage or go the Left Coast Writers page on their website.

What do you like to do when you’re not writing?
That’s easy, I like to read, preferably on a plane going somewhere exotic and fascinating because I also love to travel and I’ve been doing it since I was a kid. Dead Love is set in Japan, in Haiti, in the Netherlands, in Singapore, and in Malaysia. I also write travel essays … constantly. I used to run, but I broke my ankle and have metal in it now, so can’t do that as much. I can do a light run—three miles or so—but too much, too often, and the ankle starts to trouble me. Broke my wrist when I fell from my bike in Holland and there’s more metal there. I love to eat, but I have all kinds of serious food allergies, so that’s been curtailed. And I like to cook, though my capabilities are questionable, except that I do make a mean brainloaf. The recipe for that is on the deadlovebook.com site.

What and where is your favorite restaurant and why is it your favorite?
In Tokyo, I love, love, love Kozue in the Park Hyatt Hotel in Nishi-Shinjuku. The hotel is actually the setting for a murder in Dead Love. I also love D’Vijff Vlieghen (The Five Flies) in Amsterdam. It is also the setting for a murder in Dead Love … and a rave. Both of these places have amazing food served in an extraordinary environment. In the Bay Area it’s Michael Mina in the Westin St. Francis. My uncle adored that place. I love it because it’s so posh and because it’s where my friends Tony and Maureen Wheeler celebrated the sale of Lonely Planet to the BBC. It was quite a momentous occasion with a small table of good friends toasting a tremendous accomplishment. The food and ambiance were perfect for a very special night.

Thanks, Linda, and best of luck with Dead Love!

You can find out more about Linda and her work at her website HERE.
Posted by Wendy Tokunaga at 9:02 AM

Wendy, Lovely interview with Linda. It really shows your mutual interest in Japanese culture. Thanks to you and Linda.

Thanks so much, Andy!

Great interview! Thank you. Linda is such a remarkable teacher.

What a fascinating background! I can see a novel based on her grandparents' lives in Shanghai.

Thanks, Leanne! Yes, I have heard from so many of Linda's students what a great teacher she is.

Susan, thanks for your comment. And, yes, I agree!

I learned so much about my good friend, travel companion and teaching buddy from this wonderful interview. Thank you so much, Wendy. And like so many, I'm definitely caught up in the Dead (which for me used only to be Grateful) mania. Now it spills over into Love.
Joanna Biggar

Thank you, Joanna! I was so happy as well to have the chance to learn so much about Linda.

Loved this. I've known Linda as a writer, teacher, mentor and friend for a decade, and I am so excited about this new book of hers. Can't wait to read it. Might actually have to go a little zoombie too, to get into the spirit. ;-)

Ione, I think going a little zombie to get into the spirit is an excellent idea. :-)