Falling Uphill is FREE on Amazon! 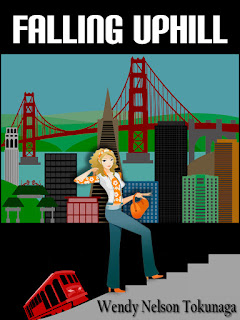 Just wanted to let you know that my chick lit mystery e-book "Falling Uphill" is free through Friday, April 27 on Amazon HERE!

You can download it to your Kindle, or on the free Kindle app for your smart phone, iPad, PC or Mac.

Would appreciate it if you could please spread the word!

And here's the blurb:

“Ruth Fenton is dead, but what does that have to do with me?” That’s what Candace Grey, 29, wants to know after receiving a puzzling phone message from San Francisco. A bright, but slightly absent-minded anthropology teacher at a small Michigan college, Candace is all set to leave for Los Angeles to conduct research on 1960s TV star Pamela Parrish—America’s Sitcom Sweetheart—for her Master’s thesis on television and female gender roles. But after discovering that Ruth Fenton is a long lost relative, she’s first off to San Francisco for her memorial service where she meets a crazy(?) old lady who claims Pamela Parrish didn’t commit suicide like everybody says—she was murdered. Now Candace has to get to the bottom of it, all while fighting the nagging feeling that her long-time professor boyfriend back home is getting a little too close to one of his students, and at the same time wondering if new-found friend Brandon, a newspaper reporter and budding painter who lives on a hidden stairway street in the hills of San Francisco, is really the guy for her. It’s a funny, but moving, uphill climb for Candace who finds that things are rarely what they seem in the ups and downs of love or in discovering a surprising secret about her not-so-perfect mother, or unearthing the truth behind the death of America’s Sitcom Sweetheart.
Posted by Wendy Tokunaga at 9:27 PM