Be Kind to the Kindle 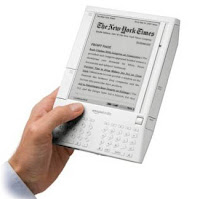 It looked like a wet dishrag in the driveway, but it was, in reality, my newspaper. The rain had been steady since early morning and even though my San Francisco Chronicle had been carefully bundled in plastic, it had turned into an unreadable, heavy mess. I could have called and had it redelivered, though even regular delivery is not always reliable where I live. But I didn’t want to bother. And I could have read it online, but I spend so much time on the computer that I look forward to taking a break when I eat breakfast, and enjoy feasting my eyes on another medium for a change.

I don’t get my hard news from the Chronicle and I don’t get it from TV. I peruse the Web news sites throughout the day, where information is instantaneous and reading in short bursts is doable. But I like the leisureliness of reading my hometown paper. I enjoy the human interest stories, the horoscope, the Jumble, the movie and book reviews, the articles about food and technology. And with the Chronicle’s recent redesign, I am finding the paper even more pleasurable to read.

But everyone knows that newspapers are dying and can no longer make money with the dwindling demand for classifieds and advertisements. And books are supposedly dying too along with the general publishing industry, the book review sections in the dying newspapers, and the demise of independent bookstores. Even the chain bookstores are in questionable shape.

So what are the remedies to these situations? I’m no expert, but I hope the newspaper and book publishing industries are looking at and thinking hard about what happened to the recording industry. Traditional books (especially hardcovers) and newspapers may be the new vinyl. Music delivery is virtually all digital, to be played mainly on iPOD-type media. There are no independent record stores anymore, other than those that sell used CDs and records, or specialize in hard-to-find, niche items. Those who still buy CDs purchase them at Target, Wal-Mart, or through Amazon, but I imagine those numbers are dropping each year.

I don’t believe traditional books will disappear. Nothing usually completely disappears (well, maybe 78s, 45s and albums). Television killed radio, but mainly dramatic radio programming -- we still listen to radio today, but in different forms with different playlists and with competition from satellite radio. And video did not kill off going to the movies as predicted back in the day, yet the number of independent movie theaters is scant and they require at least two screens to survive. The multiplexes predominate and the idea of opening up a video or DVD rental store these days is laughable in this age of Netflix and on-demand movies via TV and computer. There are rumblings that TV-on-demand and cable and satellite will cause the demise of network television.

I am not one to resist change -- in fact, I usually embrace it. My husband has ordered the newest version of Kindle and I’m excited to try it (and I’m happy to say that my novel, Midori by Moonlight, is now available on Kindle). I’ve heard from many people that reading via Kindle is not the same as reading on a computer, and they can’t say enough good things about it. And as a writer I am heartened to hear that statistics have shown that those who read via personal electronic readers actually purchase and read more books. I could envision myself reading my San Francisco Chronicle at breakfast on a Kindle -- I’d even pay for the privilege because the experience would be so much different from reading on the computer, and it would eliminate the worry over soggy or undelivered newspapers, and not mention the hassle of stopping delivery during vacation time.

Hopefully independent bookstore owners and the publishing industry will look to creative solutions to their economic woes and avoid the fate of those tied to the music industry who had the rug pulled out from under them. Some independent movie theaters in the San Francisco Bay Area have banded together to survive. Independent bookstores like Book Passage in Corte Madera and Bookshop Santa Cruz seem to thrive by offering community along with books.

None of this is easy or a sure thing and the demise of certain things is unavoidable. But I choose to be positive in this time of gloom and doom, embrace the changes, and look forward to the future.
Posted by Wendy Tokunaga at 9:07 AM