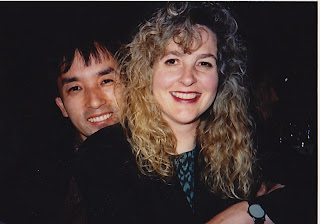 In my latest novel, LOVE IN TRANSLATION, (out on November 24!) the American protagonist, Celeste Duncan, finds herself unexpectedly in Japan and unexpectedly falling for her homestay “brother” Takuya, a Japanese born and raised in Tokyo. I’m a second-generation San Franciscan and, while Celeste is a fictional character and not based much on me, I also fell for a Japanese man who I’ve been married to now for twenty years.

Cross-cultural marriages are nothing new and there are many such marriages between Western men and Japanese women. But I’ve always been fascinated by the fact that, despite many changes going on in Japanese society, couples made up of Japanese men and Western women are still unusual.

With this in mind, I’ve decided to conduct a series of interviews about cross-cultural marriage with Western women married to Japanese men. We’ll explore the joys and the special challenges of these relationships both inside and outside Japan, and how the typical stressors of marriage such as in-laws, kids, money, jobs, housework, etc. can become even more stressful when the intricacies of the Japanese social world are thrown into the mix.

To start the series off, I’ve picked my first interview subject—me!—briefly talking about my marriage to Manabu Tokunaga, a software architect, musician and surfer, born and raised in Osaka. In the coming weeks I’ll be posting interviews with a variety of foreign wives sharing their captivating stories about how love can transcend culture.

Where and how did you meet your husband?

When my husband gets asked this question, he likes to say that we met through an ad in a newspaper. And this is true. But it was not one of those “Women Seeking Men” personal relationship ads where someone who likes long walks on the beach is seeking a fun-loving, marriage-minded guy. I had put in an ad in the San Francisco Bay Guardian to find someone who could help me translate original song lyrics into Japanese for a music project. Manabu answered the ad and ended up helping me record my songs. Our mutual love of creating music was a big factor in us getting together.

Did you live together in Japan? 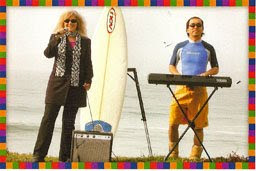 No. When I met Manabu he had been living in the United States for about twelve years. He came here for college and stayed for graduate school and then on to his career. He never really felt that he fit in living in Japan and, although he didn’t initially intend to live permanently in the U.S., this is what ended up happening. I was inspired by his desire for trading his culture for a new one and eventually created a character who felt the same way (albeit a female one) in my first novel, Midori by Moonlight.

Did you know anything about Japan or Japanese culture prior to meeting your husband?

Yes, I was a certified Japanophile, having studied Japanese language and culture in college. I had traveled to Japan and also lived there for a year.

Had you ever envisioned that you might marry a person from another culture?

Yes. I was always attracted to Asian men. The tall, blond, big-muscled football player was never my type. And I was always the kind of person open and interested in other cultures, perhaps because I grew up in San Francisco, which is so culturally diverse.

Do you and your husband speak Japanese to each other?

Rarely. When I first met Manabu, I wanted him to speak to me in Japanese, but his English was so much better than my Japanese so it never seemed to work. He also has this problem I’ve encountered with other Japanese, of having difficulty talking to a person who does not have a Japanese face! But we sometimes speak pidgin—I might say, “Oh! That makes me feel very natsukashii (nostalgic).”

Do you and your husband have any communication problems that have nothing to do with language?

Sometimes. Japanese have something called ki ga tsuku, which I have understood to mean roughly, anticipating another’s feelings before he or she has to express them. This is a very nice sentiment and foreigners visiting Japan are often overwhelmed by an abundance of hospitality and ki ga tsuku. But in everyday married life one may not be so attuned, especially if you’re not used to doing this. Expectations get missed and offense can be taken and sometimes you don’t realize this has happened until way after the incident has occurred. This is sometimes why Japanese think that Americans can be inconsiderate and misunderstandings can happen. Hopefully I’ve gotten better at this after twenty years.
Posted by Wendy Tokunaga at 3:51 PM