LOVE UNDER COVER - by Jessica Brody 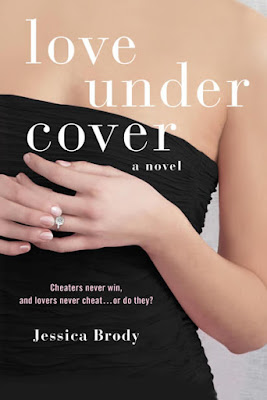 My guest today on the Girlfriend's Cyber Circuit Lit Blog Tour is Jessica Brody, author of the very successful The Fidelity Files, which is currently in development as a television series by the executive producer of Crash. Now Jessica is back with the next installment, with LOVE UNDER COVER, which is available now!

In her job, she’s an expert on men…

In her own relationship, she doesn’t have a clue.

Boyfriend behaving badly? Suspect your husband of straying? Jennifer Hunter can supply the ultimate test. She runs a company which specializes in conducting fidelity inspections for those who suspect their loved ones are capable of infidelity.

An expert on men, Jennifer can usually tell if they're single, married or lying... Unfortunately, her new boyfriend, Jamie, is one of the few men that she's never been able to "read." Has she finally found the perfect man or is he too good to be true?

"With a complicated, sympathetic protagonist, worthy stakes and a clever twist on the standard chick lit narrative, Brody will pull readers in from the first page."
– Publisher’s Weekly

"Those who enjoyed Brody's debut will be eager to catch up with Jennifer, but newcomers will be intrigued, too...an honest, witty portrayal of modern love."
- Booklist

“With her usual smart, deft, and witty prose, Brody delves deep into the psychology of a woman who tests the fidelity of strangers for a living but struggles with commitment in her own life."
- Joanne Rendell, author of Crossing Washington Square and The Professors’ Wives’ Club

Jessica graduated from Smith College in Massachusetts with degrees in economics and French. In 2005, she left her job at MGM Studios in Los Angeles to become a full-time freelance writer and producer. Jessica currently lives in Los Angeles, where she is working on her next novel. Visit her website here.

Jessica took some time to answer a few questions about LOVE UNDER COVER and the writing life.

What was the inspiration behind the writing of LOVE UNDER COVER?
As soon as I finished writing my first novel, The Fidelity Files¸ I knew that Jennifer’s journey wasn’t over yet. Although she had seemed to find her happy ending there was so much more fun stuff I had in mind for another book. Setting Jennifer up with an entire agency of fidelity inspectors was definitely the first and foremost on my mind for the next instalment.   Plus, I really wanted to explore what a fidelity inspector would be like in a committed relationship. After everything she’s seen—all the cheating, dishonesty, and betrayal—would she really be capable of settling down herself? So that’s what I set out to focus on in this book.

What is the elevator pitch for LOVE UNDER COVER?
LOVE UNDER COVER is the compelling story of a woman who runs a “fidelity inspection” agency, hired by suspicious spouses to test the faithfulness of their loved ones. Although at work she may be an expert on men, in her own relationship, she doesn’t have a clue…

Who are the top three writers who have influenced your writing style?
Helen Fielding is the reason I’m writing today. When I read Bridget Jones’ Diary back in college, my life changed. It was the first book I’d read for “pleasure” (rather than for a school assignment) in a long time and I’d forgotten how entertaining and fun books could be. I knew right then and there that I wanted to write to entertain people. Just as Helen Fielding had entertained me.   I’ve also been heavily influenced by Sophie Kinsella for her charm, wit and humorous story telling style and Jodi Picoult for her depth of soul and realism.

What is your advice for those who looking to get their novel  published?
Take criticism. Believe in your work and stand behind it, but don’t be afraid to make changes. Use rejections to evolve yourself as a writer, not just to line your waste basket. When someone rejects your work and offers a reason, don’t just blow it off and claim that they “didn’t get it” or that they clearly didn’t read it closely enough, dissect it and try to figure out if what they’re saying makes sense and if it will inevitably help your work. There’s a fine balance between staying true to your art and being open for suggestions, try to stay somewhere in the middle. If they “didn’t get it,” chances are, readers won’t get it either. And you won’t be there to explain it to them in the middle of Barnes and Noble.

What do you like to do when you’re not writing?
What? You mean there’s life outside of my office? Who knew! I don’t have a lot of free time as I tend to over commit myself to projects. But one thing I love is my bowling league. Our team is in first place going into the championships. I take it very seriously. I even scheduled my book tour around the play-offs. That’s how hard core I am!

Continued success to you, Jessica!
Posted by Wendy Tokunaga at 9:18 PM